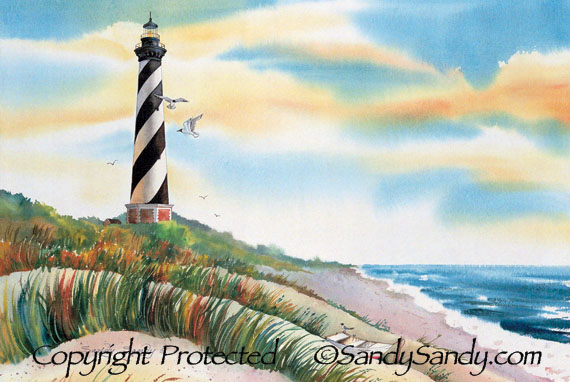 << PREVIOUS        CLASSIC PRINT GALLERY       NEXT >>
Lithograph Print - 12" x 16" Single Matted (ivory) w/ backing board, in an acetate sleeve ~ $35.00 USD
Limited to an Edition of 500. ~ Signed & Numbered by the Artist / Ready to put into a standard size frame.
(Copyright notice not on actual print.)
Built in 1870, the 208 foot Cape Hatteras Lighthouse is the tallest in the nation. When it was built, it was about 1,600 feet away from the ocean, but by 1987, erosion had reduced that distance to a mere 160 feet. The lighthouse was in danger of destruction by the Atlantic as proven by a violent storm in 1994 when heavy surf actually reached the base of the beloved landmark. In 1999, the lighthouse, along with all of its auxillary buildings, were moved intact, to a spot 2,900 feet back from the original site. The 4,800 ton brick tower was propped up on rollers and moved inch by inch along a steel track by hydraulic push jacks in a technique borrowed from the ancients. The total move inland to safety was estimated to take about six weeks, but took only three. This project marks a major milestone in the preservation of America's landmarks.

Also See BUTTERFLIES AT BARNEGAT LIGHTHOUSE and  HAWKS AT CAPE MAY, NJ LIGHTHOUSE
<< PREVIOUS        CLASSIC PRINT GALLERY       NEXT >>
Want something similar in a different size or color scheme? Email Sandy about doing a commission painting.